Welcome to The Show, Garrett Mitchell '17

Garrett Mitchell, a 2017 graduate of Orange Lutheran, was called up to the Milwaukee Brewers on Saturday, August 27. His call-up made him the 4th Orange Lutheran baseball player to reach the major leagues joining Gerrit Cole '08, Brandon Mauer '08, and Jason Martin '13. 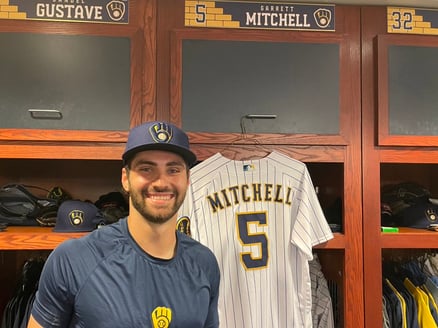 Mitchell didn't waste any time getting acclimated to the big leagues. He had his first big-league hit on Sunday; a 2 RBI single up the middle to take the lead.

He didn’t stop there! The next day, the Brewers were down 5-3 in the bottom of the 8th against the Pirates. Mitchell tied the game with a 2-run homer; his first career home run, leading the Brewers to a 7-5 victory.

On social media, the Brewers gave Mitchell a warm welcome as he came up from the Triple-A Nashville Sounds. Mitchell is soaking up living out his childhood dream, he says in their feature video.