In the first full high school fall sports season since the start of the COVID-19 pandemic, Orange Lutheran saw all six of their programs advance to the CIF-SS playoffs, with one team bringing home the top prize.

Down 27-16 with seven minutes remaining in the 4th quarter of the title game, the Lancersexecuted a nearly flawless comeback to take the Division 2 crown 38-35, their first football CIF championship in 15 years.

Finishing the season 22-9 and third place in the Trinity League was enough for the Lancers girls volleyball team to secure a CIF-SS Division 3 playoff berth.

OLu opened the postseason against Valley Christian and advanced in 3 sets. The Lancers then facedMillikan and again went 3-0 to move on to the CIF-SS quarterfinal round where they lost in straight sets to Etiwanda.

The Lancers girls tennis team earned an at-large bid into the CIF-SS Division 2 playoffs where they took on Beverly Hills High School in Round 1 of the postseason.They came up short, falling 10-8 in the match and finishing 8-10 on the season. 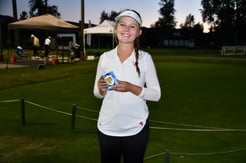 In an OLu first, the girls golf program ended another historic season with junior Alexia Egdahl winning the Trinity League individual title with a +2 over two days and 36 holes at Los Serranos Golf Club.Her sister, freshman Mason Egdahl, placed 7th overall, and the two advanced to the CIF-SS Individuals tournament.

The team’s 2nd place finish in the Trinity League advanced the Lancers to the CIF-SS Division 2 Team championships where they finished third out of 20 teams. Both Alexia and Mason earned 1st Team All-Trinity League honors, while Hannah Batcheller, Riley Shin, and Jayne Sung were named 2nd Team All-League.

With a 19-9 overall season record and a third place 3-2 finish in the Trinity League, the OLu boys water polo team earned the 8th seed in the CIF-SS Open Division playoffs.This matched them with No. 1 seed Huntington Beach, and the Lancers fell short 14-8.

Both teams finished high enough in the prelims contest to race the Mt. SAC course once again in the CIF-SS Finals meet where they both finished in 10th place.

Focused on faith and character development, Orange Lutheran Athletics seeks to pursue victory while bringing honor and glory to God. As part of the nationally recognized Trinity League, Orange Lutheran is known for its long history of athletic excellence across 25 athletic programs for student-athletes.