Orange Lutheran Athletics is excited to announce the hiring of four-time Olympic Water Polo champion Brenda Villa as its new Aquatics Director. Coach Villa will provide leadership and oversight of the water polo and swim programs in this role. In addition, she will serve as Girls Water Polo Head Coach and support the boys water polo and swim programs as an assistant coach.

Coach Villa comes to Orange Lutheran with outstanding accolades and coaching experiences. She is a graduate of Stanford University, where she played water polo as a national champion, and a graduate of Concordia University Irvine, where she earned a master's degree in Coaching and Athletic Administration. 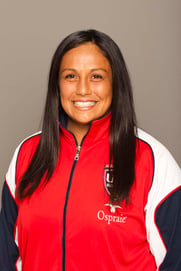 “Orange Lutheran has the utmost confidence in Coach Villa’s experience and her passion for leading our program in a way that aligns with and upholds our school’s mission, vision, and important cultural standards,” school administration said in an email to families regarding the hiring of Coach Villa.

A four-time Olympian, Coach Villa played for the USA Water Polo Team from 1996 to 2012 and served as team captain from 2005 to 2012. Her teams won silver medals in 2000 and 2008, bronze in 2004, and gold in 2012. Additionally, she won three Italian and two European championships while competing for a prominent Italian professional team from 2004 to 2010. She is the eponym for the Brenda Villa Aquatics Center in Commerce, CA.

“I am really excited to join Orange Lutheran as the Aquatics Director,” said Villa. “I appreciate the school's student-centered approach and look forward to working with all aquatic student-athletes. It is great to be back in Southern California, the gold standard for water polo.”

Coach Villa previously served as Head Girls Water Polo Coach at Castilleja School in Palo Alto for 11 years. She was the general manager at Belle Haven Aquatics, where she played a crucial role in helping to grow the youth water polo program. Since 2011, she has served as the CEO and co-founder of the Brenda Villa Foundation. Coach Villa also serves as a board member for USA Water Polo and an advisory member to the Women's Sport Foundation, Positive Coaching Alliance, PanAm Aquatics, and the LA28 Olympic committee.

Discover how Orange Lutheran High School is the difference you've been looking for.