In the 4x100 relay, the group consisting of Desmin Jackson, Matthew Kalousitan, Xane Uipi, and Deuce Frierson-Cotter PR'd (personal record) with a time of 42.56 to notch victory by only 0.02 seconds over Servite. 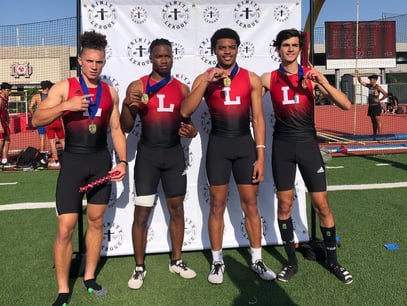 In the long jump, junior Hannah Wons took home the title with a 16' 11" jump. Her jump was 6" in front of her closest competitor. 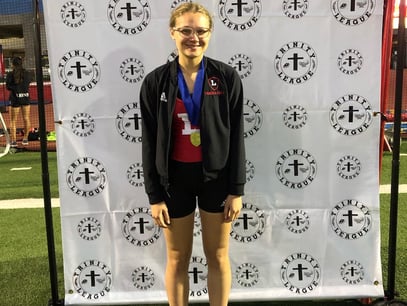 Senior Kennedy Cunningham, a Purdue-Northwest commit, won the girls high jump with a mark of 5' 1". She won the competition over the scores of 4' 11". 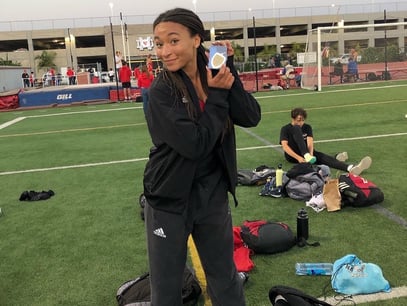 Senior Pesi Tauaika took home the title in the shot put with a mark of 40' 1 1/2". She beat out her teammate and fellow senior Rebel Tuinuknafe, who had a mark of 39' 8". Leah Gilmore finished 3rd, and Heaven Johnson finished 4th. All 4 of them will advance to CIF Prelims. 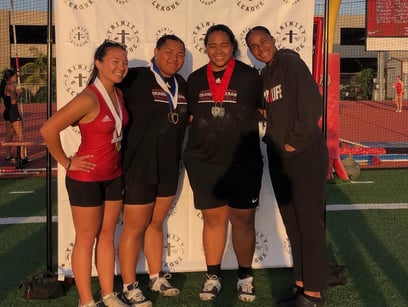 Overall, the Lancers have 21 athletes moving onto the CIF Prelims in 12 different events. The prelims will be held Saturday, May 7, at Estancia High School. Below is a list of the athletes and the events they will be competing in:

The group of Desmin Jackson, Matthew Kaloustian, Xane Uipi, and Deuce Frierson-Cotter ran 42.74, which was good for 2nd place. Only Cathedral had a better time than the Lancers.

The team of Amelia Trautman, Caroline Kargenian, Shelby Perez, and Kennedy Cunningham just slipped into the Finals finishing 9th with a time of 4:11:14.

Three Lancers are off to the Finals in the shotput. Rebel Tuinunnakfe and Pesi Tauaika tied for 3rd with a 41' 5".  Leah Gilmore finished 9th with a 34' 1".  Heaven Johnson just missed qualification but had a great throw of 32' 3".

Two Lancers are through in the pole vault.  Nicolas Ling and Van Rhodus both vaulted an 11' 6".

Three long jumpers advanced to the CIF Finals after qualifying on Saturday.  Hannah Wons finished 2nd with a jump of 17' 1".  Kennedy Cunningham advanced in her 3rd event with a 16' 0".  On the boys side, Samson Seiler just squeaked through in 9th with a jump of 20' 3/4".

17 Lancer Track & Field Athletes competed in the Division 3 CIF Finals held at Moor Park High School on Saturday, May 14. Three of those 17 are headed to the CIF Masters meet.

Kennedy Cunningham had a jump of 5' 2", which was good enough for 4th place and a Masters qualifying spot.

Pesi Tauaika was 4th in the discus with a throw of 126' 10". The throw was 17 feet longer than her prelim throw at Estancia. She qualified for Masters in the discus.

The boys 4x100 relay team consisting of Desmin Jackson, Matthew Kaloustian, Xane Uipi, and Deuce Frierson-Cotter, finished 5th with a time of 42.70, which was 0.04 faster than their prelim time.

Senior Jaylen Lynch ran a blazing 48.84 400, finishing 5th in the competition. His time was 0.58 faster than his prelim time the weekend before.

The girls relay team of Amelia Trautman, Caroline Kargenian, Shelby Perez, and Kennedy Cunningham ran a PR of 4:05:87, finishing 9th. The time was 6 seconds faster than their prelim time.

Hannah Wons jumped 17' 3" in and finished 5th in the meet. She just missed a Masters qualifying spot. Her jump was 2 inches longer than her prelim jump. Cunningham also competed in the long jump and hit a mark of 15' 10" good for 9th place.

Blake Brewer finished 5th in the boys high jump with a mark of 6'.

Samson Seiler finished 7th in the boys long jump with a mark of 20' 1".

The trio of Cunningham, Tauaika, and Tuinuknafe will all take part in the CIF Masters meet at Moor Park on Saturday, May 21.

On Saturday, May 21, Kennedy Cunningham, Pesi Tauaika, and Rebel Tuinuknafe competed in the CIF Masters meet at Moor Park with the hopes of advancing to the CIF State Meet.

Tuinuknafe placed 3rd at the Masters meet with a shot put throw of 41' 10", a season record.  Her mark was enough to advance to the State Meet in Fresno, California, over Memorial Day weekend. 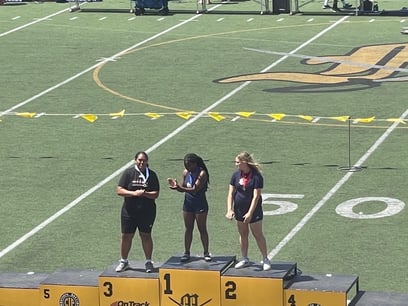