Orange Lutheran swept the podium at the Trinity League Tennis Finals to win both the singles and doubles titles. 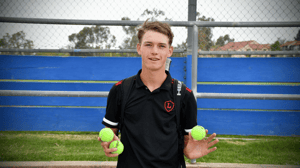 Junior Paul Dandler won the singles title after a thrilling 3-set win (6-7, 6-3, 6-1) over Mater Dei's number one singles player. Dandler entered the tournament with a 43-7 overall record this season, including a 25-5 record in league play. Dandler only lost one set en route to the singles title. 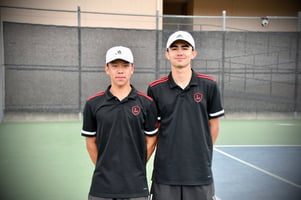 Seniors Michael Ishizaki and Andrew Raab won the doubles title with a 3-set win (6-4, 4-6, 6-2) over Santa Margarita's number one doubles pair. The duo only played together four times all season before the league tournament. Ishizaki was primarily a singles player for the Lancers, going 32-12 in all singles competitions. The win is only the second doubles championship in school history.

On Thursday, May 19, Dandler, Raab, and Ishizaki competed in the CIF-SS Individual 2nd and 3rd round at Lakewood Tennis Center.

Dandler opened up the day with a victory in straight sets over David Truong of Oxford Academy (6-3, 6-2).  In the third round, he lost in straight sets to conclude his tournament and season.
The pair of Raab and Ishizaki also won their round 2 matchup before falling in the 3rd round of the tournament.

The 3 of them are the first set of boys tennis players to represent the Lancers in the CIF Individual tournament since the doubles team of Chris Sunshine and Marcus Van Der Watt in 2019.