Farrell was the manager of the United States 12U baseball team this summer and led the national team to the World Baseball Softball Confederation (WBSC) World Cup Gold Medal following a 10-2 win over Venezuela in the finals.

Farrell was initially named the manager of the 12U squad in 2019, but due to Covid-19, there were no national team games during 2020. In 2021, the team played three games in Texas, but the pandemic again forced the cancellation of any international competition.

Finally able to start fresh in 2022, Farrell and his staff selected 18 players to represent the United States at the WBSC in Tainan, Taiwan. The roster was made up of players from all over the country. The tournament featured 11 teams and included pool play, followed by the super round and the finals. The United States went undefeated in the tourney, defeating all seven opponents. 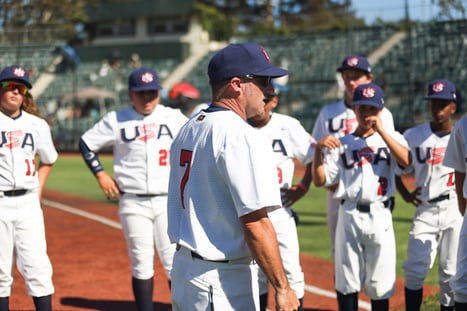 “It was an amazing experience,” said Farrell. “To represent our country with a great coaching staff, operations team, and such a talented group of athletes is something I will never forget. Knowing that this group will forever be World Champions is very special. It was a true honor to be a part of this experience.”

Farrell will be back on the diamond in his familiar spot as the 3rd base coach when the Lancer baseball season begins next spring.