Heading into the 2021-2022 season, expectations were high for the Lancers. Coming off a year where the COVID-19 pandemic wiped out the majority of their season, the Lancers were excited to get back into the pool for a full year of action. Led by one of the top players in the county, Anna Pearson, OLu was aiming for a run at a CIF-SS title. Alongside Pearson, a UCLA commit, were fellow seniors Delaney Palmer, a UCSB commit, and USC commit Caitlin Cohen. They were joined by a slew of underclassmen who helped OLu earn a top 5 ranking in the preseason.

The Lancers challenged themselves all season. In addition to the Trinity League schedule, OLu added trips to the Holiday Cup, the Newport Invite, and the Santa Barbara Tournament of Champions. Through the season's first eight games, OLu was 5-3. They had notched a key opening day victory over Los Alamitos 9-8.

After the new year, they took on the top two teams in CIF Division 1 in Newport Harbor and Laguna Beach. They lost a tight battle to Newport but won a 15-14 thriller over perennial power Laguna the next day. The girls won 8 of their final 11 games to end the season with a 16-8 overall record. They went 3-1 in the Trinity League, their lone loss being to Mater Dei. Their regular season was good enough to earn them the #3 seed in the CIF-SS Open Division Playoffs.

Taking on Mater Dei under the lights at Foothill High School, the Lancers looked to avenge their earlier loss this season at the hands of the Monarchs 6-4. They did just that, earning a 9-6 win and a berth in the CIF-SS Semifinals.

The girls jumped out to a 4-1 lead behind three goals from Anna Pearson and led 5-4 into the halftime break. Out of the break, senior Caitlin Cohen scored back-to-back goals in the 3rd as OLu led 8-5 after 3. That lead would be enough as the Lancers closed it out 9-6. Sara Naulty, Sofia Umeda, and Samantha Kim each added a goal. Sophomore goalie Lauren Steele was stellar in the cage saving 15 shots, many timely saves.

The win means the Lancers are into the semifinals, where they will meet Laguna Beach. The game is slated to be played at Woollett Aquatics Center in Irvine on Wednesday, February 16 at 5:30 pm.

On a blustery cold night at Woollett Aquatics Center, the Lancers took on defending CIF-SS champion Laguna Beach in the CIF-SS Semifinals. The last time the Lancers made an appearance in the semifinal was in 2019.

Laguna started strong, notching a 3-0 lead after the 1st quarter. Samantha Kim got OLu on the board in the second, but the Lancers trailed 5-1 after the 2nd. Laguna would continue to extend the lead in the 2nd half and knocked off the Lancers 10-3. Sofia Umeda and Caitlyn Cohen were the other goal scorers for OLu.

The loss ended the Lancers run in the CIF-SS playoffs, but they will still play in the CIF State Regionals starting on February 22. The draw to decide who they will play is on Sunday, February 20. 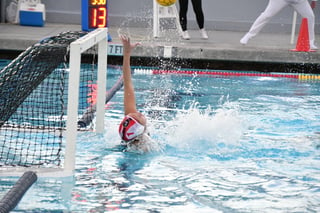 The Lancers now advance to the CIF State Regional Semifinal, where they will meet Laguna Beach in a rematch of the CIF-SS semifinals from last week. The game will be played at Laguna Beach at 4 pm.

In the CIF State Regional semifinal, the Lancers met Laguna Beach for the 5th time this season. The Lancers had won one of the prior four meetings.

The girls controlled the game, leading 2-0 after 1 and 7-4 at the half. However, Laguna scored in the final minute of the 4th quarter to tie the game and send it to overtime. In overtime, Laguna pulled away for a 13-10 victory. Six different Lancers scored goals, including three from Anna Pearson, two from Delaney Palmer, and two from Caitlin Cohen.