“Orange Lutheran has the utmost confidence in Coach Laulhere’s experience and his passion for leading our program in a way that aligns with and upholds our school’s mission, vision, and important cultural standards,” school administration said in a recent email to families regarding the hiring of Coach Laulhere. 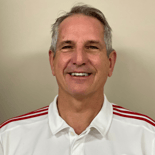 Laulhere is a long-time member of the Lancer community as a Social Studies teacher, current head coach of the OLu Surf Team, and the father of two Orange Lutheran alumni. In college, he was the starting setter for Santa Barbara City College in 1984-85. He continued to pursue a career in beach volleyball where he earned a AAA ranking in the California Beach Volleyball Association and played select events on the East Coast Molson Tour before moving to Park City, Utah in 1990. There, he coached beach volleyball and their indoor teams.

In 2000, he was hired at Orange Lutheran, where he coached the boys and girls volleyball programs. He was an integral part of taking the Lancers’ volleyball programs to the top of the sport, ultimately leading the boys to the 2005 CIF title. Laulhere won 10 league championships as a coach and looks forward to returning to the sport.

"One of my greatest passions growing up was playing beach volleyball,” Laulhere said. “The excitement I felt when I heard CIF was introducing Girls Beach Volleyball as an official sport was invigorating. Having this opportunity to coach beach volleyball is a true blessing, I look forward with anticipation to what God has in store for the upcoming years".

Joining Coach Laulhere is Orange Lutheran alumnus AJ Christensen, who will serve as the associate head coach overseeing logistics. Coach Christensen currently serves as an assistant coach for both the OLu girls and boys indoor volleyball programs, and his passion to serve the Lord through his love of volleyball has been a blessing to our Lancer student-athletes.

“I’m excited to be a part of establishing this program,” said Christensen. “Coach Laulhere and I have a vision of creating a passionate and fun environment that continues the amazing culture and love for the student-athletes at Orange Lutheran.”

The Lancers anticipate fielding varsity and JV level squads during their inaugural season, and  Irvine’s Great Park beach courts will serve as the Lancers’ home venue. The team will only play the Trinity League schedule before beginning non-league contests in 2023.

On Tuesday, February 15, the girls beach volleyball team had their first match in school history against Newport Harbor.  It was a windy and cold day at Grant St. in Newport Beach as the Lancers competed in varsity and JV.  The girls ultimately fell four games to 1 on the varsity side and three games to 2 on the JV side.  The girls were supported by several classmates, staff of OLu, and their families. 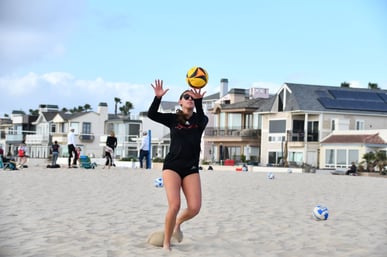 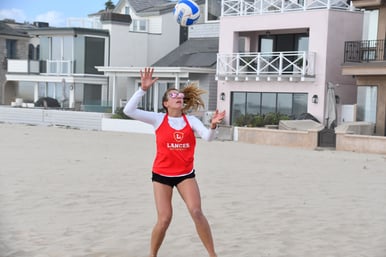